Make new friends, but keep the old, one is silver and the other gold

Rotary International Assembly gathers more representatives than the United Nations.  Rotary’s 540 District Governors connected with each other and International Leadership in San Diego last week.  The focus was service, the theme “Rotary: Making A Difference”, and the tone was certainly…International.  Those thinking that Rotary is predominately an American Organization should know – 71% of Rotarians are not American, thus Rotary International.

While absorbing world-class presentations, goals and programs at the 2017 International Assembly, I was drawn to the blend of Asian, Indian, European, African and American cultures and participants.  As the week progressed, District Governors-Elect connected and shared the inevitable: “What’s Next?”.  Connections easily developed into exchange plans towards potential global projects based on shared causes.  Opportunities abound for health, literacy, community development, water and sanitation service projects within the overarching goal of global peace and cultural understanding.

Golden Re-Connections
While enjoying new acquaintances, we were warmed by renewed service based friendships.  In San Diego I reconnected with Kenya Past District Governor Geeta Manek from Nairobi, Kenya.

In 2012 Geeta, as Nairobi Kenya’s District 9200 Governor, facilitated our joint project to provide $500,000 of medical equipment to Kapsowar Mission Hospital.  Our 2012 Kapsowar project was a model of sustainability, validated by follow-on projects.  Geeta’s 2017 role was International Assembly Training Leader – her service passion continues.

Ginger & I were thrilled to reconnect with Matti and Virpi Honkala from Finland, also International Training Leaders.

We first met Matti in 2004 when he led a Group Study Exchange Team from Finland to Tennessee and Virginia.  Matti was our house guest and we greatly enjoyed his company.  Re-connections are truly golden.

New Connections
During International Assembly, Past RI President Carl Wilhem-Stenhammar, Sweden, stated: “If every Young Adult exchanged into another country, we would have world peace”.  Exchanges extend connections, change lives of participants and Make a Difference in the World.  Rotary District 2240 in the Czech Republic & Slovakia facilitates over 1,000 Youth Exchanges every year.  What a standard! Do you desire world peace? Then promote and sponsor Youth Exchange!

Group Study/Cultural Exchanges are renewing – “back by popular demand”. Teams of four young professionals or Rotaractors are led by a Rotarian, both outbound and inbound, for four week visits. We expect team members to return with reports of life changing leadership, cultural and vocational experiences and suggested future global service projects. Our District 7570 plans to exchange with Mumbai India (Winter 2017). We met District 3060 Governor Classmate Ruchir and Sohangi Johni, District 3060, Gujarat, India at International Assembly and “hit it off” during a breakout class.  Ruchir previously served as a Group Study Exchange Leader into France.  Our District previously exchanged with the Punjab District of Northwestern India. 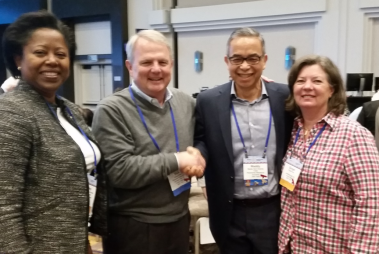 We are exploring an exchange with Suriname/Guyana/Trinidad (Spring 2018).  This expands a close relationship from a wheelchair distribution project in 2014 in Trinidad.  District 7030 Governor  Classmate Waddy and Shirley Sowma from Paramaribo, Suriname are close friends, having met at earlier zone training events.

These global connections will generate friendships and Make a Difference as lasting steps towards Global Understanding.

Rotary’s International Assembly is the District Governor-Elect’s jumping off point for Services Stories – opportunities ahead!